Rate this article and enter to win

Did you know that working your core adds a lot more to your well-being than washboard abs? Our core is made up of many different muscles, including our obliques (the muscles covering our ribs) and diaphragm (our primary breathing muscle). These muscles work together to do two main things: 1) help stabilize our spine, and 2) transfer energy throughout our bodies.

The benefits of a strong, stable core

Spinal stability is important because of the vast network of neural connections that run through our spine. These nerves are responsible for transmitting the signals throughout our bodies that allow us to move in a coordinated manner. In order for these signals to be communicated properly, our spine needs to be stable and erect. Poor posture and movement can compress the spine, causing pain and eventual injury.

To train your abs’ ability to stabilize the spine, it’s important to practice exerted stable movements, such as a plank. These types of movements teach your body to resist the tendency to collapse into poor posture. For example, in a plank, you’re holding tension in your abs to prevent your hips from rising up or falling down.

Your core is also responsible for transmitting energy throughout your body. To understand how this works, think of a boxer: When a boxer goes to throw a punch, they gather their strength by using their legs to generate force against the ground. This force is then transmitted up through their core and into their punching arm as they exert it into their target.

A weak core can negatively affect our ability to pick up, carry, or put down objects; throw things; or even do something as simple as carry your backpack without straining your lower back. To train your abs to better transmit force, you need to practice movement-based exercises that require you to contract and release your abs.

Below is an easy-to-follow abdominal circuit consisting of seven different movements that are completely crunch-free (because—let’s be honest—we’re pretty over crunches). Each movement increases in difficulty to help you create a strong, functional core.

To build these exercises into a full workout, perform each movement for a minimum of 15 seconds. As you get stronger and better at the exercises, work your way up to 45 seconds per movement. Repeat each movement for two to four sets. Focus on keeping your hips as steady as possible while also controlling your breathing.

Lying on your back with your hands raised, lift your knees up to a tabletop position toward your core, and back down again.

Perform variation one, but as you lift your knees up and down, move your arms along with them.

Perform variation two, but instead of moving both your knees and arms, move one arm at a time, opposite your knees, one after the other.

Facedown, place your palms on the floor with your knees hovering a few inches above the ground. Lift one foot and then the other, switching each time.

Facedown, place your palms on the floor with your knees hovering. Instead of lifting your feet, lift your palms off the ground, one at a time, tapping your opposite shoulder each time.

Facedown, place your palms on the ground with your knees hovering. Lift your opposite foot and hand at the same time, switching sides each time.

Front plank to side plank

Start in a plank position on your forearms. Then, rotate your body to the left and lift your right arm. Then place the arm back down and turn toward your right, lifting the left arm. 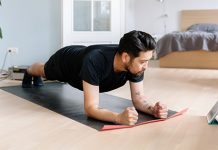 5 indoor workouts to keep you fit all year round 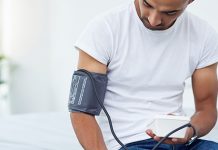 Ask the doc: “What can I do about my high blood pressure?” 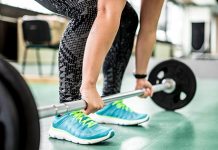 FitnessU: How to nail the perfect deadlift